You are here: Home > Knowledge base > The Hai||om > History in Etosha

Etosha and its former human inhabitants

The Etosha National Park – one of the world’s largest national parks and Namibia’s premier tourist attraction – receives more than 100 000 visitors every year, with two-thirds of all foreign tourists including it in their itineraries. The abundant wildlife within the park presents the best opportunity in Namibia to see African wildlife, a major motivation for tourists to visit Africa. Indeed, Namibia’s largest populations of lion, elephant, rhino and other large mammals are found in the park.

However, the understandable fascination that Etosha’s wildlife holds for visitors masks the fact that various social groups used to live within its 22 270 square kilometres. The eastern areas were formerly inhabited mainly by Otjiherero-speaking groups, and the areas to the north of the “great white place” (or “place of dry water” as “Etosha” is alternatively translated) by Oshiwambo-speaking groups. 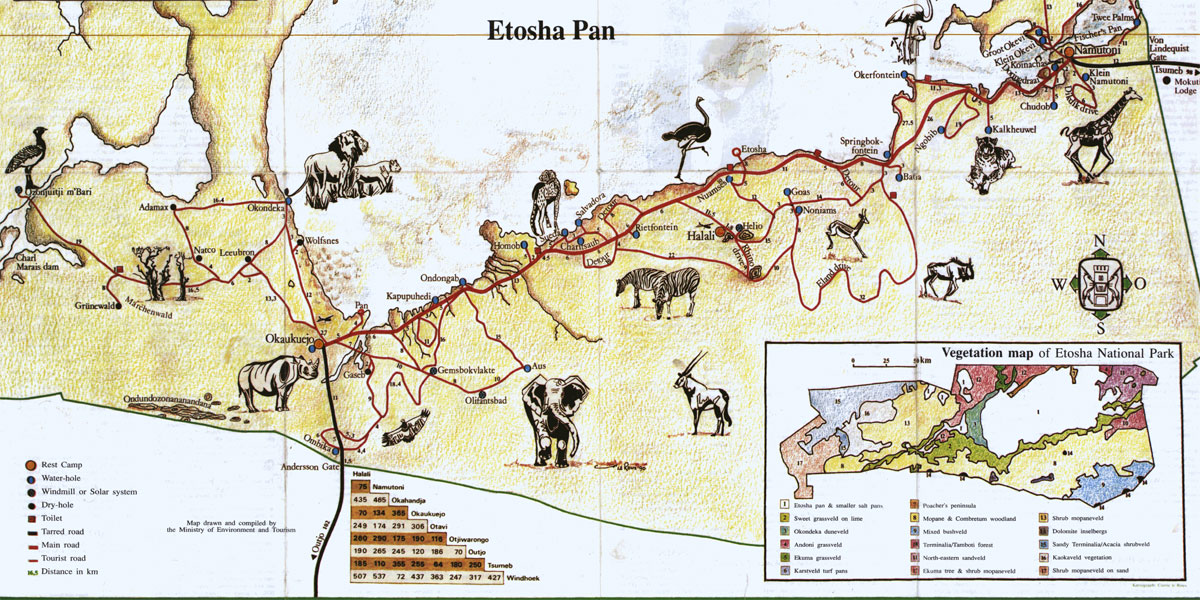 The area to the south of the pan, where most tourist roads and camps are situated, was primarily the domain of Khoesan-speaking people, who hunted and gathered around the pan. The land they occupied within the park’s current borders comprised over 700 000 ha (7 000 square kilometres). These people are known as Hai||om, one of the various groups classified in Namibia as San, or “Bushmen”; in terms of education, employment, access to resources, land tenure and political representation, they are today one of the most marginalised communities in southern Africa.

During the 19th and early 20th centuries, the Hai||om lived in the region stretching from Owamboland, through present-day Etosha, to Grootfontein, Tsumeb and Otavi, and south to Outjo and Otjiwarongo. Far from being isolated, they were enmeshed in elaborate trade networks with their Oshiwambo-, Otjiherero- and Khoekhoegowab-speaking neighbours.

The German colonial administration established the park in 1907 but tolerated – and indeed welcomed – the presence of the Hai||om, much of whose traditional territory outside of the park had been colonised by white settlers.

At any given time over the years, between a few hundred and one thousand Hai||om must have lived in the park, inhabiting mainly the southern fringes of Etosha Pan itself.

The number varied according to the prevailing economic and environmental conditions – for example the demand for labour on surrounding farms, on the one hand, and the seasonal availability of bush foods, on the other – but no clear trends can be identified.

There is one official census available, dating to 1938 (when the park area was still known as Game Reserve No. 2), and only for the Namutoni area:

Detailed list of Bushmen residing in the Namutoni area forming part of the Game Reserve No. 2, 1938

This census should be treated with caution, however, as no indication is given of how and when the officers counted the people at the waterholes. According to season and availability of resources, the Hai||om moved to temporary camps in order to hunt game or gather bush food. They also moved to other settlements if resources were abundant there. Thus, the number of people staying at one place was dependent on the size of the water source, ecological circumstances, the seasonal availability of bush food and socio-political factors.

The Hai||om remained in the park for almost another half century, until in 1954 they were finally forced from their ancestral home. As a result, they joined the legions of landless farm-labourers, from one generation to the next eking out a living on the farms on Etosha’s borders; their labour sustained an uneconomic and heavily subsidised white-owned commercial agricultural sector.

Since 2004, the Hai||om have had a recognised Traditional Authority. Although the chief does not enjoy the uniform support of all Hai||om, the fact that their Traditional Authority is recognised by the government is an important development, not least because it facilitates communication and negotiation between the community and state institutions.

In 2008, one farm and a portion of another close to the border of Etosha were bought by the government for resettlement purposes. It is intended to accommodate about 200 Hai||om households. The government furthermore plans to buy some more farms for the Hai||om, all of them adjacent to Etosha National Park. It would appear, then, that the government acknowledges the fact that Etosha was formerly inhabited by the Hai||om. It remains to be seen, however, how the resettled Hai||om will survive from the land.