You are here: Home > Knowledge base > The Hai||om > San in Southern Africa

The San in Southern Africa

One name and various groups 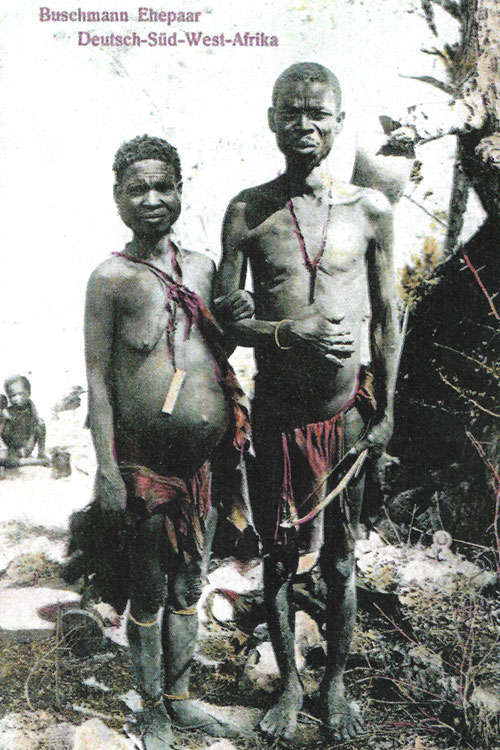 The people labelled “Bushmen”, “Boesmans” or “Buschmännner” by English-, Afrikaans- and German-speaking immigrants respectively usually call themselves by the names of their individual groups, such as Ju’|hoansi, Hai||om, Khwe, !Xun, !Xoon, Naro, G|wi, G||ana or ‡Khomani; they speak a great number of different Khoesan languages. What all of them had in common was basically a lifestyle predominated by hunting and gathering at the time of the colonial encounter.

It is estimated that about 100 different Khoesan languages and dialects were still spoken during the 19th century. Today, only about 20 of these survive, and it seems likely that for many of them, language death is inevitable. Some languages spoken by San groups such as the Khwe, Naro, G|wi, G||ana and Hai||om are more closely related to Khoekhoegowab, the language of Nama and Damara herders, than to languages spoken by the Ju'|hoansi and !Xun, or the !Xoon and ‡Khomani.

For centuries, these different groups were scarcely aware of each other’s existence. However, the last few decades have seen the emergence among the various groups of a sense of common identity. This sense is grounded in the shared experience of marginalisation and land dispossession, and is accompanied by rising political awareness.

The term “San” has been accepted by a large number of representatives of the various groups as having less derogatory connotations. Nevertheless, many San are quite comfortable referring to themselves as “Bushmen”, and sometimes even prefer the term, as it recognises their indigenous status as “people from the bush”.

The shared experience of dispossession

Bantu-speaking pastoralists started to intrude into southern Africa from the north in the first half of the last millennium. From the mid-17th century, they were followed by European explorers, adventurers, traders and colonialists, who advanced towards the continent’s interior on their quest for land, water, animal products and mineral resources.
The San were either gradually driven off their land or enslaved. Although some San still live on their ancestral land, the control over land and resources more typically lies in the hands of commercial farmers, pastoralists or the state.

Today, about 100 000 San live spread throughout southern Africa, the majority in Botswana (about 50 000) and Namibia (some 36 000), with a few thousand in Angola, South Africa, Zambia and Zimbabwe.