You are here: Home > Knowledge base > Waterholes & places > |Gomme-ais 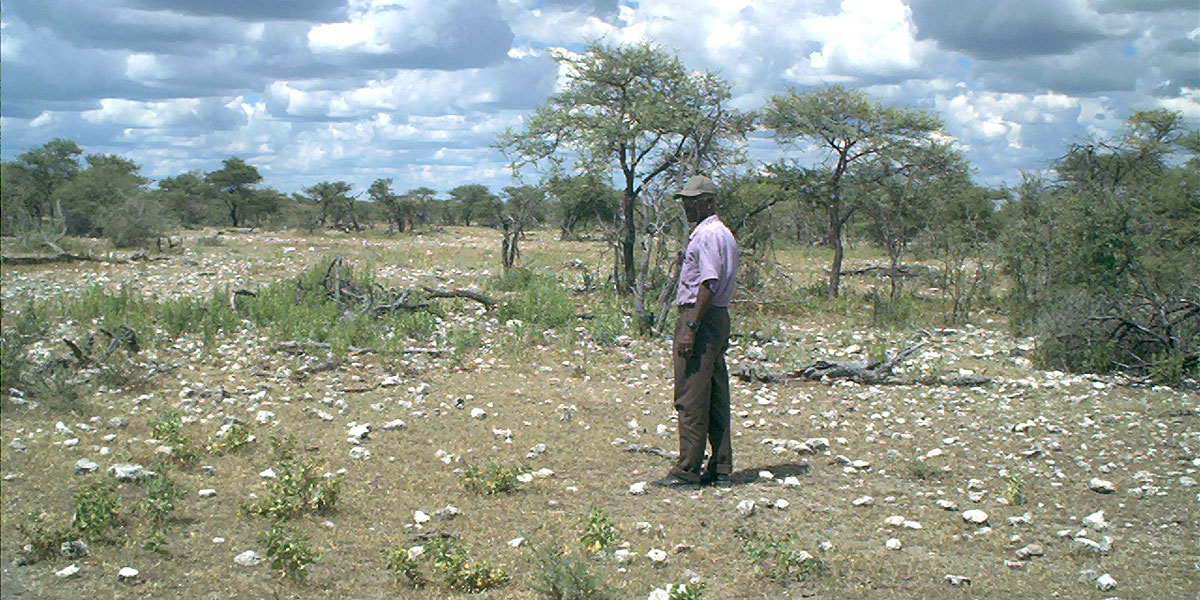 - Reminiscence of the eviction -

Adjacent to what is called Koinagas on tourist maps is an area known by the Hai||om as |Gomme-ais. The area can be seen as a reminiscence of the eviction of the Hai||om from the park. |Gomme-ais can be translated as “you cannot enter, the bush is too thick”, though nowadays this is no longer the case, as the area has been severely overgrazed. 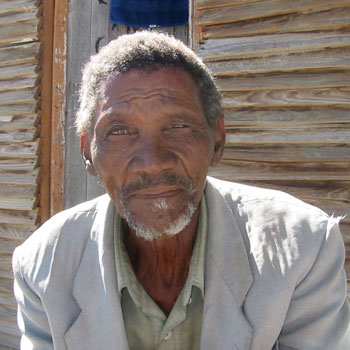 Many Hai||om from the various waterholes in the Namutoni area had been instructed to gather here in 1954; once assembled, they were ordered by the Native Commissioner to leave the park. Hans Haneb, who born around 1936, was present, and can still remember the event.

“I have come here to tell you that it is the order of the Administration that you move out of Game Reserve NO. 2. The reason for this order is that you are destroying the game. You may go into the Police Zone and seek work on farms south of Windhoek, or elsewhere. You must take your women and children with you, also your stock. There are many farmers who will take you into their employ and I am sure allow you to have your stock with you. Those of you who do not wish to go and work on farms must move into Ovamboland, but without your stock of any description, i.e., cattle, horses, goats, donkeys, fowls, dogs etc. You will have to be out of the Game Reserve by the 1st May, 1954. If you are still in the Game Reserve on that day you will be arrested and will be put into gaol. You will be regarded as trespassers. … None of you will be allowed to return to Game Reserve NO. 2 from Ovamboland. Those of you who go to farms will not be allowed to return to the Game Reserve unless you are in possession of a permit issued by a Magistrate. … I hope you understand this message. If you have something to say I will listen but I wish to tell you that there is no appeal against this order. The only Bushmen who will be allowed to continue to live in the Game Reserve are those in the employ of the Game Wardens. Convey what you have heard today to your absent friends and relatives.”

Replies made by some of the Bushmen at Namutoni do not deserve any comment. Those of Okaukueyo made no representations. … I should have held these meetings with the Bushmen in November but was asked to postpone them by your telegram. … In the meantime 80 % of the Bushmen have already left the Game Reserve and have taken up employment in farms in the Outjo, Tsumeb and Grootfontein districts. Although I told those remaining at Namutoni and Okaukueyo that they should seek work on farms South of Windhoek, I added, or elsewhere, as the whole object is to get them to leave the Game Reserve. [sic] It would be impracticable and certainly undesirable to try and compel them to take up employment on farms in a particular portion of South West Africa. I understand that since November, 1953, certain farmers were given permits by Magistrates to enter the Game Reserve for the purpose of recruiting Bushmen labour. …

The message he delivered to the Hai||om attending the meeting was unequivocal: they had to leave the reserve for the sake of the game, and would only be allowed to return if they were in possession of a permit. Three months later it was reported that all “Bushmen” (except those employed there) had left the reserve to work on neighbouring farms. Henceforth, only a few Hai||om whose labour was needed were allowed to stay at the police stations and tourist camps.